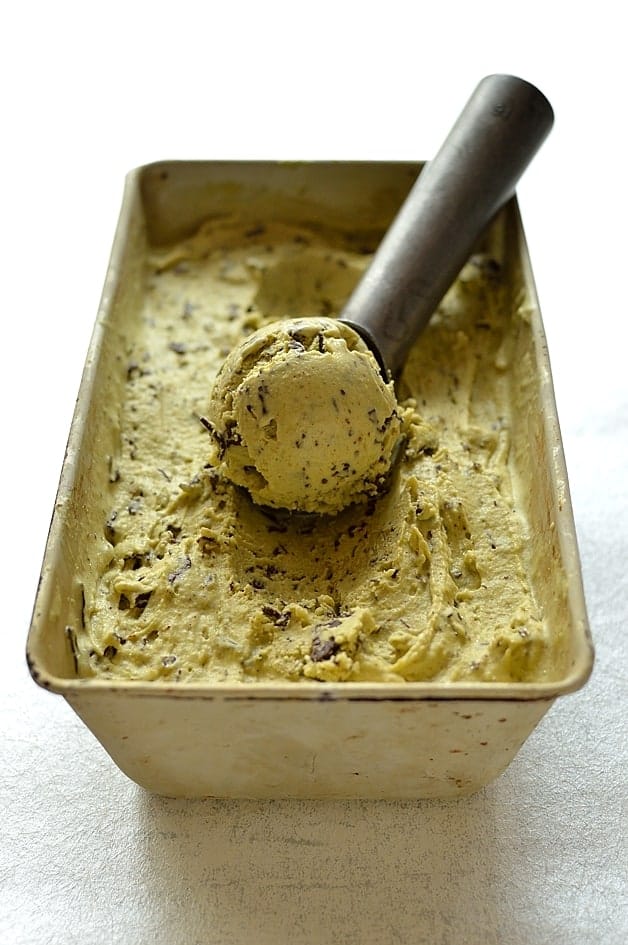 We have had some truly hot, summery weather recently, perfect for ice cream. Not that I think there is ever a bad time for ice cream, but you can’t deny that it is much more satisfying when eaten in the sunshine; preferably on a beach. Though living in Birmingham there is a definite shortage of beaches nearby… In the garden then. 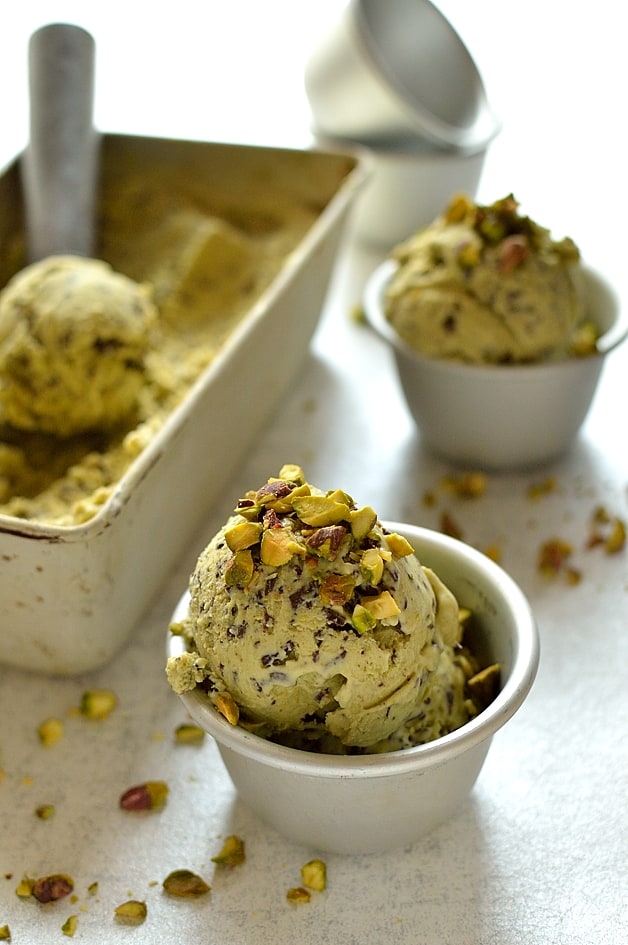 I am a bit of an ice cream fiend – I would happily eat it every day, several times a day if I could, and I have never met an ice cream flavour that I didn’t like. That being said, I used to always avoid pistachio ice cream, I would eat it if there was nothing else, but there were far more interesting flavours to be had. My tastes have changed however and now it is a flavour that I actually truly enjoy; and I enjoyed it all the more when I went and added chocolate to it! 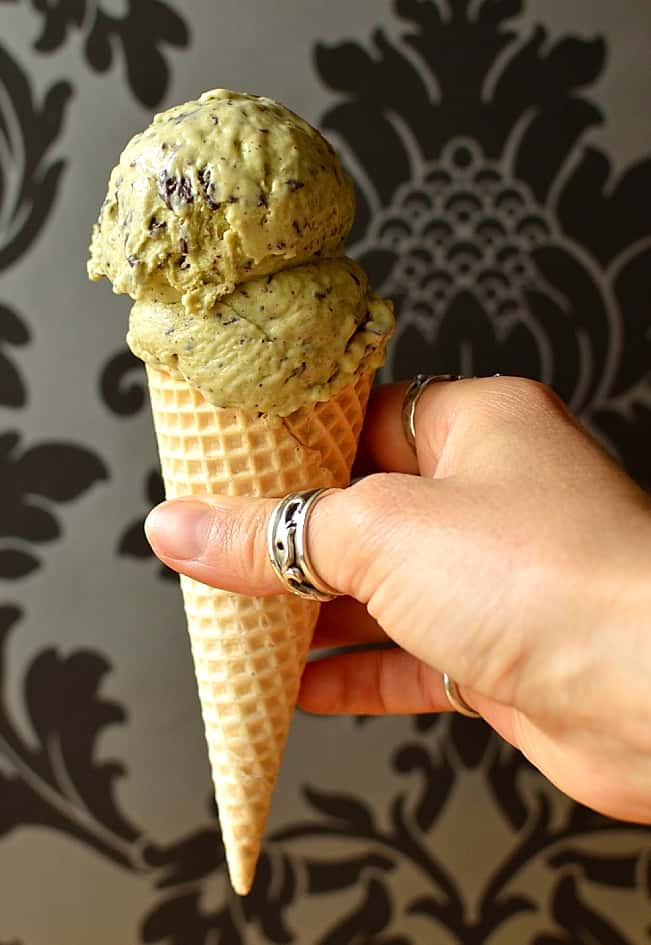 Stracciatella is an easy way to jazz up any plain ice cream flavour; traditionally the base would be plain milk or vanilla ice cream, but the effect of drizzling melted chocolate into cold, churning ice cream to create thin flakes works well with lots of different flavours. Of course you can omit it and just have plain pistachio ice cream, but I much prefer the version with chocolate in it.

The ice cream base is thickened with cornflour rather than egg yolks so there are no flavours competing with the pistachio, and as a bonus it is suitable for anyone who happens to have an egg allergy. The pistachio taste comes through strongly as I first toasted the pistachios a little to intensify the flavour, then blended them to a puree with the milk; the flavour deepens even more if you make the base the day before you churn the ice cream and let it sit in the fridge overnight. I added a couple of drops of green food colouring as the natural pistachio colour can be a bit sludge-like; just add enough to brighten the green a little though, too much and it will look unnatural or like mint choc chip ice cream rather than pistachio. 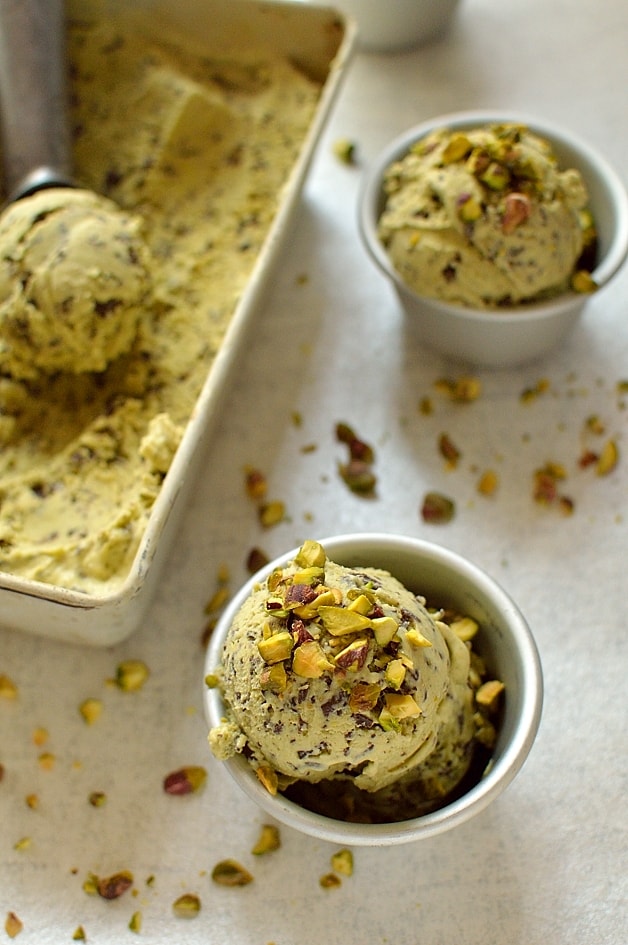 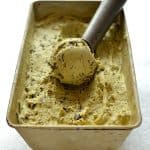 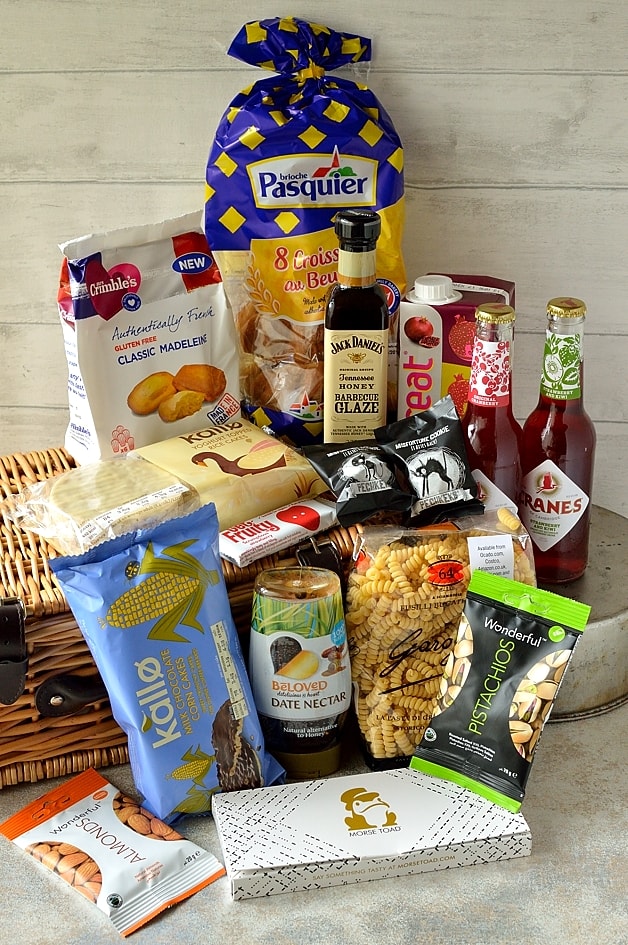 Welcome to my review of the May 2016 Degustabox. If you’re not familiar with the Degustabox then in brief it’s a subscription service whereby each month you’re sent a box full of goodies to try; most are either new brands or products and it works out far cheaper than buying everything individually in the shops. It is a bit of a lottery however as you have no idea what you will be sent, some products you may love, and others you might not be so keen on; the surprise element is quite fun though, and it encourages you to try products that you wouldn’t normally think to buy. If you fancy giving a box a try yourself then simply enter the discount code BLDEG15 at the checkout and you’ll get £6 off your first order!

My favourite products included were:

Kallø yoghurt coated rice cakes and Belgian milk chocolate corn cakes: Tasty yet healthy, both of these make a great alternative to biscuits and are ideal for snacking on.

Mr’s Crimbles gluten free madelines: I was pleasantly surprised by these, for gluten-free cakes they had a good texture and were very more-ish; they are also individually wrapped so perfect for packed lunches.

Pechkeks misfortune cookies: These are quite fun – black fortune cookies with brutal, scathing and pessimistic messages inside. They make an amusing alternative to regular fortune cookies and I had some thoughts about giving them as wedding favours when I get married…

Jack Daniel’s Tennessee Honey Barbecue Glaze: I haven’t had a chance to use this yet as I don’t cook meat very often but JD and honey sound like a great combination for a barbecue glaze.

Garofalo Bucati Corti pasta: A shape that I have not yet come across in supermarkets, but it is still just pasta.

Cranes cranberry cider: Neither I nor the several other people that I tried to hand it off to liked this at all…it just tasted odd and slightly sickly to me.

Brioche Pasquier croissants: All butter croissants free from preservatives, hydrogenated fats and artificial colours, wrapped in two’s so that they keep longer. These were nice, though decidedly better when warmed through in the oven.

Get Fruity fruity bar: Made with fruit, oats and coconut oil with no added sugar; I received a strawberry flavour one, it was ok, quite tasty but very small and I don’t think it is something I would buy. I imagine it would be good for kids lunchboxes.

Beloved Dates date nectar: This is a very thick, slightly grainy syrup that does taste like dates. I think it would work well as a vegan alternative to honey or a sweetner for things like smoothies but without testing it I have no idea how well it would work in baking.

The Wonderful Company almonds and pistachios: These are literally just regular nuts, but in a bewilderingly minuscule quantity; I presume that they are individually portioned packets, but you could save both money and packaging by simply buying a big bag of nuts and portioning them out yourself. I used the pistachios in the pistachio stracciatella ice cream above, though I also had to buy extra as the packet was so small… 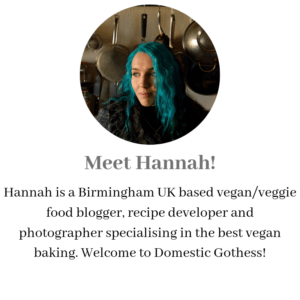 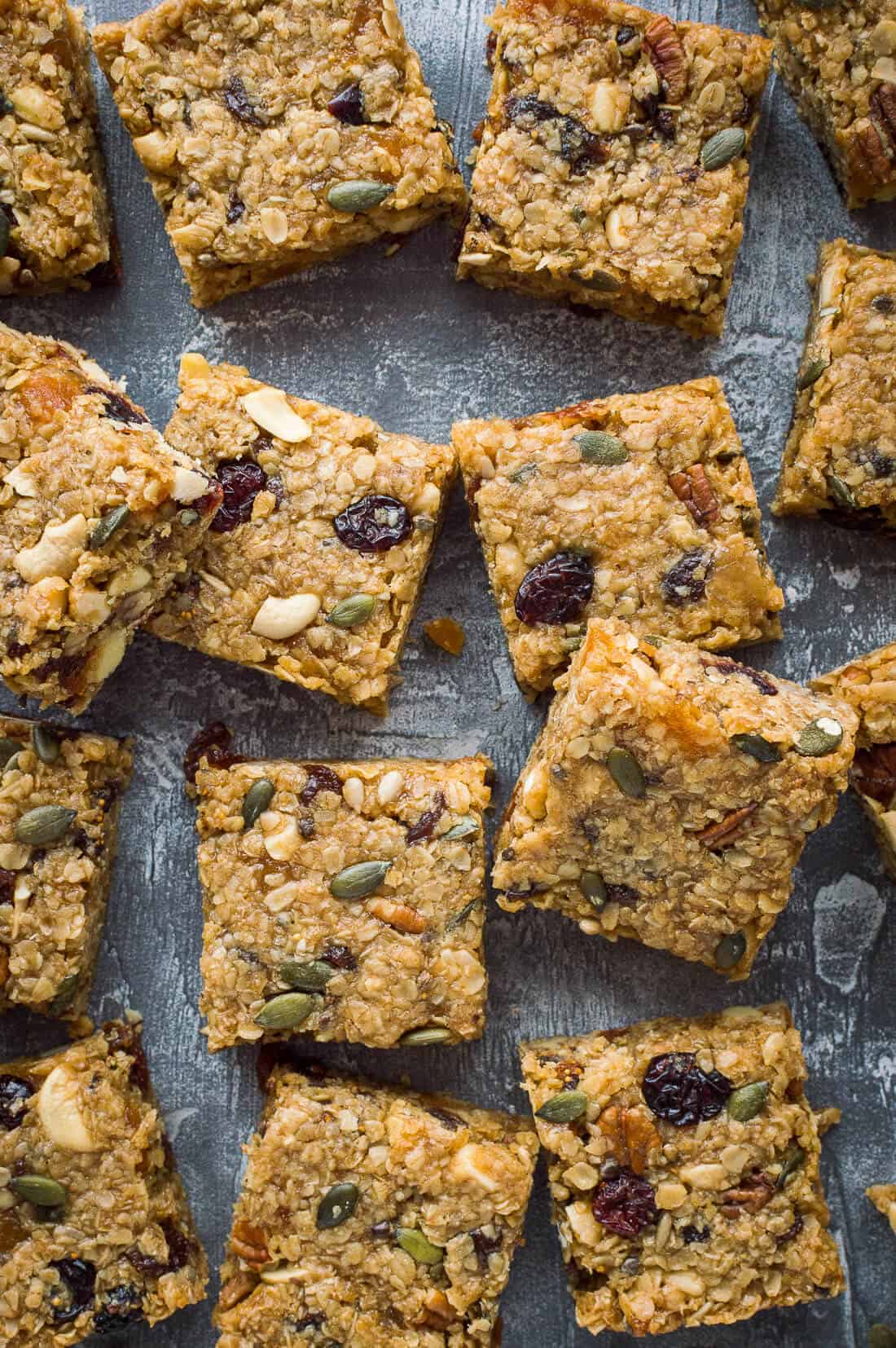 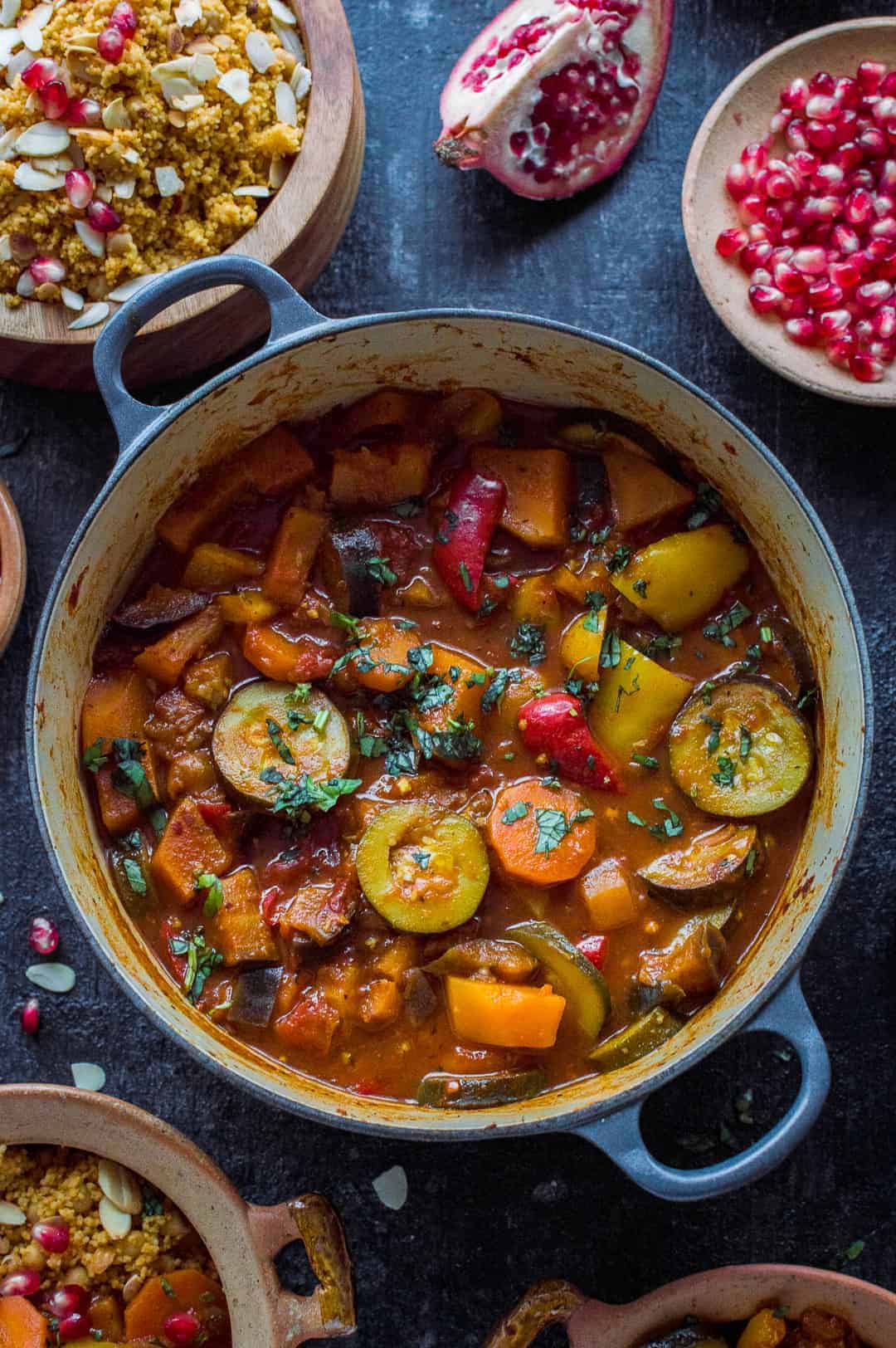 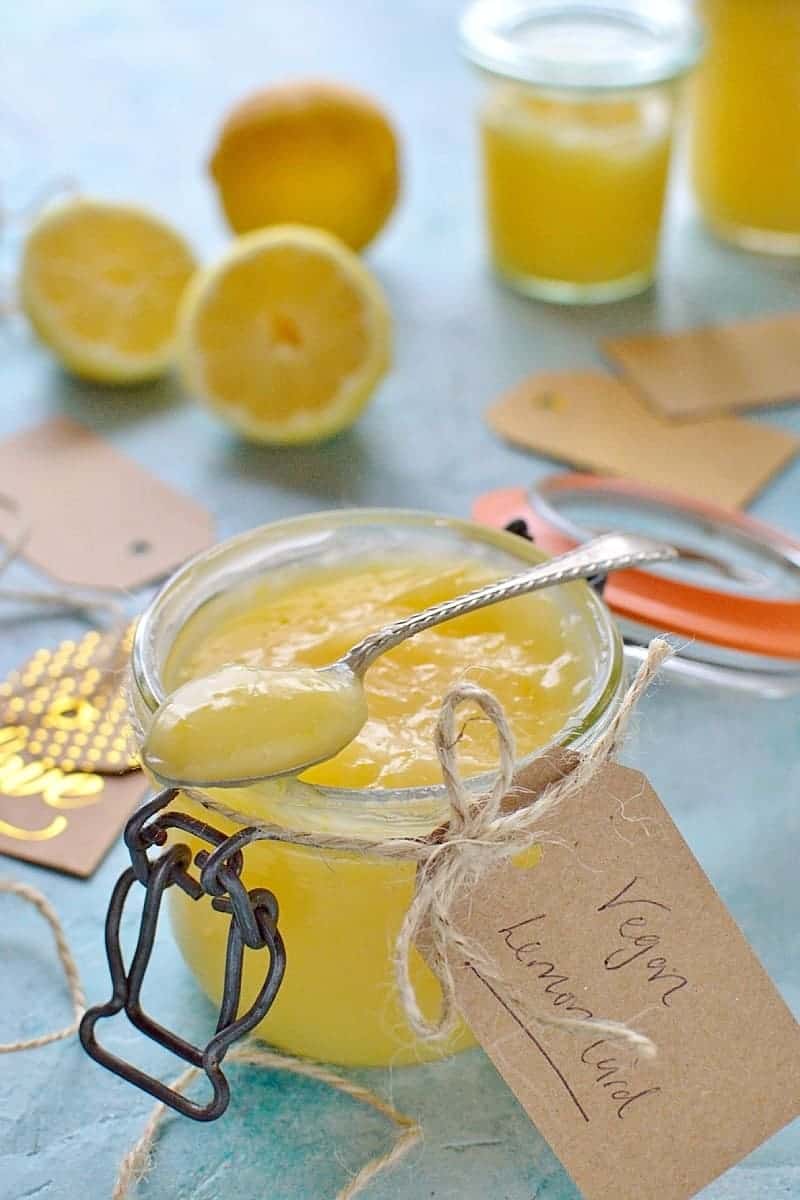 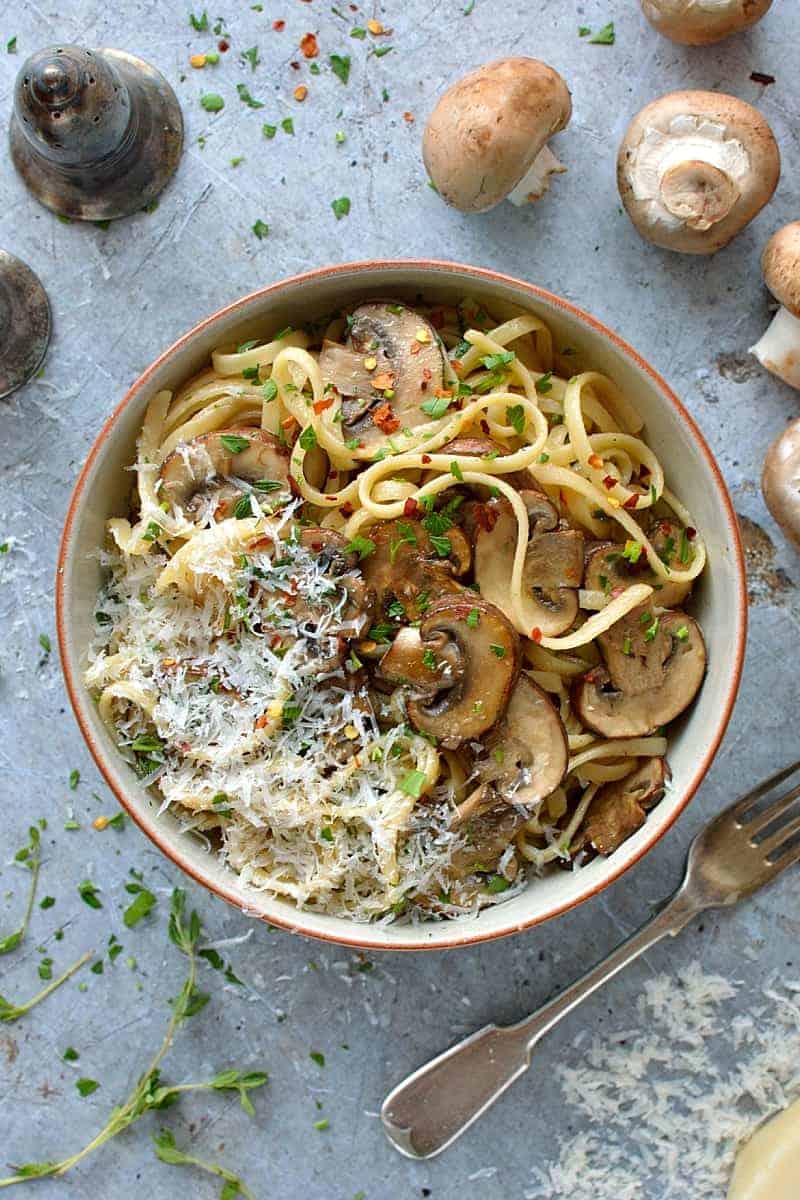